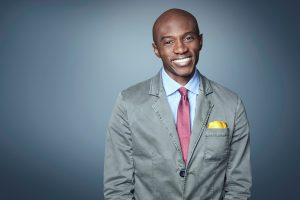 Darran Simon, a journalist who developed an expertise reporting on trauma during a wide-ranging career that had recently brought him to The Washington Post, where he covered District politics and government, died April 9, 2020. He was 43.

Simon was born in England and spent his childhood in the South American nation of Guyana and in New Jersey. In his professional life, he displayed restless curiosity as well as deep compassion for people who had endured natural catastrophe and man-made violence.

“I am drawn to writing about suffering and trauma,” he once noted, “because I am in awe of the human spirit’s ability to persevere.”
After two years as the Miami Herald’s minority affairs reporter, he moved to New Orleans in 2007 as an education reporter for the Times-Picayune, compelled to document the aftermath of Hurricane Katrina. “Down the road, 35 years from now, when memories are all I have,” he told the University of Rhode Island alumni magazine, “I’ll be able to look back at this time and remember this experience.”

He wrote about school reconstruction and covered accountability issues as well as the upending of students’ lives in a city of dramatic inequities even before the storm. “History often depends on who is telling it,” he said. “My role is to try to understand it and paint a full picture.”

A reserved and conscientious reporter, he went on to cover crime for the Philadelphia Inquirer, was a general assignment reporter for Newsday, and was a senior writer with CNN Digital in Atlanta focusing on national and international breaking news before starting March 2 on The Post’s Metro staff.

In covering the city government’s preparations for handling the coronavirus outbreak, he reported on official pronouncements as well as delivering humane accounts of local victims of the disease, including a former “Jeopardy” contestant.

“Darran had an immediate impact at The Post with his talent, grace and earnest devotion to his work,” said Mike Semel, The Post’s top metro editor. “He was here barely a week when the city he was covering shut down because of coronavirus. But he forged ahead and found great stories to tell.

“Despite his short tenure,” Semel continued, “we entrusted him to write the main coronavirus news story several times over the past couple of weeks — taking feeds from his colleagues and weaving those into a coherent story. He worked so well with everyone and was a graceful, fluid writer. But beyond that, he was just a nice guy with an electric smile.”

Darran Anthony Simon was born in London to Guyanese students on March 18, 1977. He lived in Guyana until he was 9 before the family settled in Iselin, N.J. His mother is a middle-school teacher and his father, an accountant, is a securities regulator for the Financial Industry Regulatory Authority.

At the University of Rhode Island, Simon was on the men’s track and field team, won awards for student leadership and shared a top prize from the Association of Social and Behavioral Scientists for a comparative study on black student activism in the 1970s and the 1990s. He graduated in 1998 with a bachelor’s degree in English and, energized by his work on the campus newspaper, received a master’s degree in 2004 from Northwestern University’s journalism school.
His marriage to Karin Pryce ended in divorce. Survivors include his parents, Stephen Simon and Jacqueline Simon, both of Iselin; a brother; a sister; and a grandmother.

Simon brought particular sensitivity to follow-up interviews after a tragedy that served to humanize statistics. One example, for CNN, was a profile of the spiritual leader who took over the flock of Emanuel African Methodist Episcopal Church in Charleston, S.C., after a white supremacist killed nine members, including its pastor, in 2015.

In July 2019, Simon was among 15 journalists chosen from about 300 applicants for the week-long Ochberg Fellowship at Columbia University journalism school’s Dart Center for Journalism and Trauma.
Dart Center Executive Director Bruce Shapiro called him a “quiet, curious and very deeply engaged journalist” who had spent years writing about survivors of violence in some of the toughest cities in the United States, from New Orleans to Camden, N.J., and how they cope with those experiences.

For all his drive to make loss more intimate, or perhaps because of it, Mr. Simon was also known as a roving epicure with a sharp understated cool to his wardrobe and an ear for sumptuous music. On his website,  Simon described himself as a “a foodie and a jazz lover who will travel anywhere for a good meal and a horn section.”