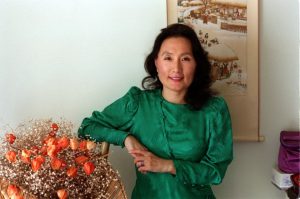 Kyonshill Connie Kang (MSJ64), thought to be the first Korean American female reporter in the United States, died Aug. 1, 2019. She was 76.

Kang was born in 1942 in what is now North Korea. By the time she was 4 her family had fled their ancestral homeland, settling first in Okinawa, Japan, and later in San Francisco, according to a biography of Kang in “Distinguished Asian Americans: a Biographical Dictionary.” Kang’s passion for English and writing blossomed through her “tumultuous and circuitous”  journey to America–across three countries and in three languages.

Kang studied journalism as an undergraduate at the University of Missouri, according to her biography, and then in 1964 she became the first Korean to receive her master’s degree from Medill.

After graduating she wrote for the San Francisco Chronicle and the San Francisco Examiner. Kang became the first Korean-speaking reporter at the Los Angeles Times in 1992, the Times said in an Obituary of Kang, after the paper acknowledged a growing need for reporters who could share the voices of Los Angeles’ Asian American communities.

“She would be flooded with calls from Korean Americans who wanted to get their stories out there, because no one else in the mainstream media spoke their language,” Hyungwon Kang, a former LA Times photo editor, told the Times.

Connie Kang also wrote a regular column for Koreatown Weekly, where coworkers spoke of her invaluable contributions to journalism.

In her final years at the Los Angeles Times, Kang began reporting and writing about religion, and then left the paper to become a minister. She graduated from Fuller Theological Seminary in 2017, passed the U.S. Presbyterian Church’s ordination exam, and dreamed of building a Christian school in North Korea.

Friends told the LA Times they remembered her as “aesthetic-minded”: that she wore colorful wide-brimmed hats, drove with gloved fingers, and grew orchids.

Kang was buried next to her parents and younger brother in San Francisco, according to Hyungwon Kang.