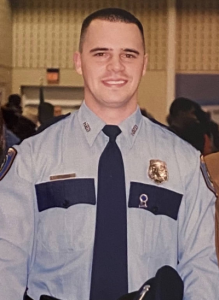 On Thursday, September 17, 2020, Benjamin Charles Williams, beloved husband to Jill and devoted father to Ashley and Joel, passed away unexpectedly at the age of 46.

Ben was born on April 14, 1974, in Houston, Texas, to Chuck and Debbie (Matteson) Williams. He attended Cypress Creek High School, where he made lifelong friends in the band and graduated in 1992. He loved to write and earned a bachelor’s degree in journalism from Northwestern University in 1996. Shortly after graduation he joined the ranks of the Houston Police Department, graduating with Cadet Class 171 in March of 1998, and eventually achieved the rank of sergeant. On June 5, 1999, Ben married his childhood friend and high school sweetheart Jill McCormack. Ashley Rose was born on February 3, 2004, and Joel Benjamin on October 12, 2008.

Ben was an encyclopedia of movie trivia and could settle any debate about anything movie-related. He was a steadfast Astros fan. He also had a heart for animals and was always bringing home or threatening to bring home a stray kitten, dog or any other species.