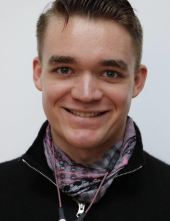 Alyk Russell Kenlan passed away on Monday, November 23, 2020. He was 24 years old, having completed his master’s degree in journalism at the Medill School of Journalism in August.

He was born Alyk Xam Kenlan, but later chose Russell to be his middle name after his grandfather Don Cooper. Lisbeth and Don Cooper were his cornerstones throughout his life. His initials became ARK, and his friends and classmates refer to him as ARK.

Alyk was the most compassionate and caring of men. His sense of style is legendary. He was a real world traveler and had visited seven continents before going to Carleton College in Northfield, Minnesota, where he graduated in 2018 with a degree in cinema and media studies and a minor in music. He had a radio show at Carleton called “Arkadia” his family listened to weekly.

Before Carleton, he was a student at Asheville School (NC), which he often said were his best years ever! He loved wearing bowties and smart blazers and was voted the most stylishly dressed student and the most accomplished swimmer. His past swimming experience was swimming in the family pond. He loved playing board games and acquired an extensive collection of sophisticated games to play with his friends, both in person and virtually every weekend. His sharp mind made him a tough competitor and teacher.

He was fluent in the Mandarin language, and his goal was to return to China or Taiwan to work as a journalist. This ambition led to achieving his most recent accomplishment of earning his graduate degree from the Medill School of Journalism in their Magazine Specialization program. Faculty and classmates remember him as kind, bright, and deeply committed to becoming a fine journalist.

Alyk finished his time in Medill reporting virtually on politics and foreign affairs under the direction of Medill’s Washington, D.C. Bureau chief professor Ellen Shearer, who said, “Alyk continued to show great promise as a budding writer and reporter. (He) was a leader in the Washington Virtual newsroom because of his creativity and intense desire to improve his craft and mission for telling stories that affect and improve people’s lives. He dove into his national security beat, reporting on stories from ways veterans were battling the isolation created by the pandemic to a sophisticated analysis of how China is trying to surpass the U.S. Military.”

From Prof. Doug Foster: “He was one of those students any professor loves having in a cohort because he researched deeply, absorbed information quickly, made connections between bodies of research in interesting ways, and was brave enough to challenge assumptions of the group with incisive questions that always advanced, and deepened our work.”

From Prof. Desi Hanford: “Alyk’s knowledge of the world always made for thought-provoking conversations in and out of class. His insights from his travels abroad gave him an understanding of the world that few people ever have. He could as comfortably discuss what was happening in Asia as he could in the U.S. Alyk was truly a global citizen.”

Alyk leaves behind his bereaved mom Daniele Albert Frost and stepdad Stuart Frost; his dad Geoff Kenlan and his partner Felicia Buske; his beloved maternal grandparents Lisbeth Riis Cooper and Don R. Cooper; his loved paternal grandparents, Jay and Carol Kenlan and his maternal grandfather, Sid Albert; his aunt and uncle, Helene Albert and Jon Young of Chicago, his uncle and aunt on Martha’s Vineyard, Erik and Rhonda Albert, and his Aunt Bekki Matthews in Colorado; his cousins Iris and Miles Albert, Sean and Ana Young, and Nick Matthews; and countless friends. He is sorely missed by them all.