Medill alumna’s recounting of the sinking of the S.S. Athenia in WWII as told by her aunt 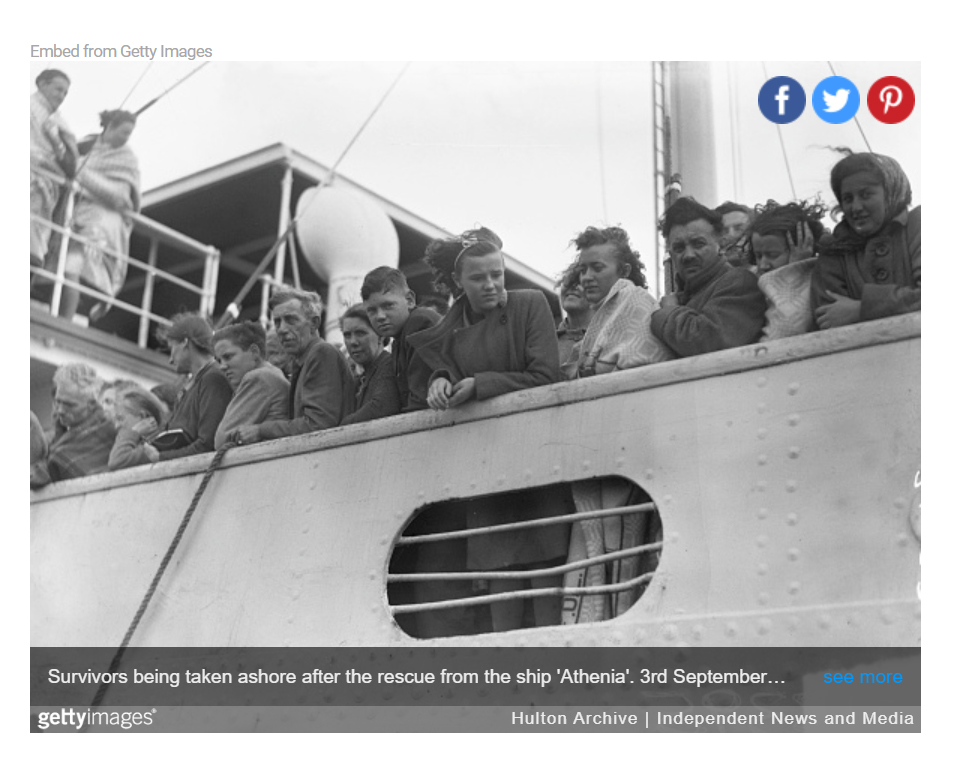 Doris Elaine Kent (4th from right, in white blanket) after being rescued by the Knute Nelson

Martha Wiedman, a 1971 graduate of the Weinberg College of Arts and Sciences, penned the following essay about her aunt, Doris Elaine Kent (Fox), (MSJ40) and her experience aboard the S.S. Athenia when it was torpedoed in 1939. The SS. Athenia was the first UK ship to be sunk by Germany during World War II. 117 civilian passengers and crew were killed including 28 U.S. citizens. Kent survived to chronicle her account of the sinking and its aftermath.

My aunt, Doris Kent, was born in 1917 to a family living in the small town of Humboldt, Kansas. She grew up during the Great Depression, the oldest in a family of five. Her appetite for adventure sprang from her fascination with the outside world and love of communication. Like three of her siblings, she attended the University of Kansas on a scholarship and graduated in 1937. She loved to write and moved to France in 1939 to work for the Paris Herald Tribune and earned her master’s from Medill in 1940. I wrote this essay to show what exactly what a woman with her interests and background could accomplish— preserving a personal experience as a moment in history.

Doris showed bravery, clear thinking and concise reporting at a time of national crisis.  In August 1939, she was a copywriter for the Paris Herald Tribune. A former colleague alerted her to the impending threat of war with Germany and she quickly made her way to Glasgow to board the S.S. Athenia on September 1st, 1939.  She chronicled her experience of the torpedoing of the Athenia and the ensuing destruction that resulted in the loss of 117 civilian lives.  She documented the terror and suffering of the passengers and the eventual rescue of most by the Norwegian tanker MS Knute Nelson, which delivered 430 survivors to Galway, Ireland.

Doris wrote her own first-hand account of the harrowing events of the time between when the torpedo struck and her rescue the following morning.

I was in the dining room (tourist) eating a lamb chop. After the awful explosion, I dashed somehow thru the door, down a long corridor, to stairs. My cabin was one deck below. I had to get my lifebelt. Going down, I found the stairs broken— clinging to the rail I got down—in pitch black felt my way to cabin–reached under bunks for lifebelts—a heavy metal trunk had been shoved in—a great shove and I got it out of way—and felt the lifebelts. On way back up broken stairs, gave one lifebelt away, feeling way up, opened door to deck and it was LIGHT! Barney was there on deck—he saw me and said— “Here, get into that boat.” It was Boat 6, the only other boat (besides 5) which had a motor and shortwave radio. No one knew how to run it and we had to row all night long. . . Lady Lake nearly fell back into the sea on top of me!

I was the next one up from Boat 6. Hanging dead weight on the bosin chair, just then I heard them scream, “Hold tight!” The ocean washed up over my head and washed me off the chair. My grip on the knotted rope held. The lifeboat surged out away, then back in. . . they jerked one great jerk—and yanked me up just as boat came crashing into ship—just below my legs—they had pulled me up just in time to keep me from being crushed. On up, to deck’s rail, and there was Captain Cook. He exclaimed, “My God, girl, it’s you!”

According to historian Max Caulfield, the sinking of the S.S. Athenia, the last passenger ship out of Europe before the start of the war, was the very first of Germany’s acts of aggression against Britain in World War II.

“Two days later,” wrote Caulfield, “with 1102 passengers aboard, the Athenia was at sea 250 miles from the nearest land. On that day, September 3, war was declared. . . Oberleutnant Fritz-Julius Lemp in command of U-Boat 30 struck the first blow of the war.”

My aunt was also an advertising copywriter at Marshall Field & Company, Chicago from 1937 to 1939, a freelance writer for the New York Herald Tribune and Paris Herald Tribune in 1939 and advertising copywriter for the Chicago-based Carson Pirie Scott & Company from 1939 to 1940. She was a public relations writer for Northwestern University in Evanston, Ill. from 1963 to 1966 and a member of the American Association of University Women (branch president from 1984 to 1986), part of the University of Kansas Alumni Association.

Note: Alicia Fox, Doris’ granddaughter, supplied vital details and news clippings to reconstruct Doris’ role in Paris and her escape to Glasgow. Deborah Fox, Doris’ daughter-in-law, created a display board of her experience on the Athenia, for her birthday.  We are all proud of Doris and I thank them for their help.